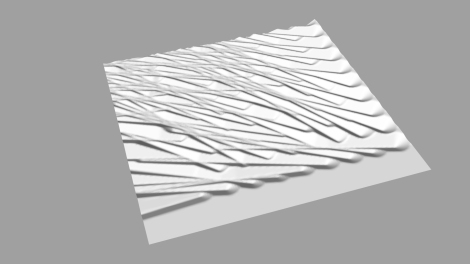 ‘Grasshopper’ is a tool/plugin that multiplies, by the dozens, the possibilities of the results over manipulating a single 3D modeled object in Rhino. As a Landscape Architecture student, I feel that using grasshopper, in a way, also multiplied my options to approach design problems for a later time during my next school year at Cal Poly. The simplest way I would describe Grasshopper is by saying that it operates with visual components (programmable buttons) that need of an input to generate an output that follows a certain rule, and as simple as that may sound, it can be very complicated and time consuming to make it follow your rules. However, in the past three weeks when consuming time to learn grasshopper, I discovered how powerful a project can be using parametrics. A project that particularly stood out to me was the “Memorial to the Murdered Jews of Europe,” in Berlin, Germany: a gridded pattern configured with monolithic concrete rectangles anchored onto an undulated field. Each solid rectangle honors the name of a victim of the Holocaust. In the same poetic way, I feel that we can connect stories from the Owens Lake itself to the parametric terrains we are to present in our final presentation.