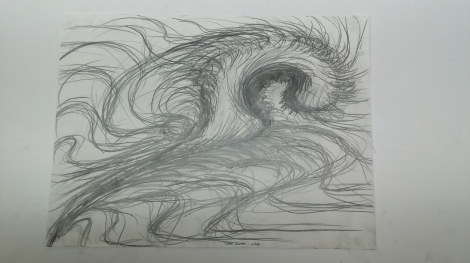 In this experimental phase of the project, we had to choreograph the behavior of wind using different utensils.  This is done by listening to live recordings of sound at a remote location at Owens Lake.  My first take was to map out the gestures of the wind by hand via graphite.  There were recurring noises that I made note of and ambient sounds that were constantly present in the recording.  What my drawings depict are the ambient noises encircling the recurring noises in a swirling manner.  The result of creating the swirls is a series of enclosures that represent contrasting sounds, with ambient noises indicating lighter value and sharper, recurring noises indicating darker values.

Our second take on this project is to choreograph wind without using our hands, or via machinery.  The principle behind the machine I created is capturing wind and conveying it into a rocking mechanism that would record via pen on paper.  Depending on the direction of the wind, the pen can also move side to side and back and forth.  Also in order to further capture the nuances of the wind, counterweights are placed on either sides of the wheels to increase the frequency of the rocking motion as the sails capture the wind.  I believe that this drawing machine can implement as a dust control mitigation method, as it mimics the movement of plows and tillage machines.